A big week for phones

As the summer of sport runs into the sunset suddenly the September of phones is upon us. Two big announcements means this is a really important month (and quarter) for a technology which has become intrinsic to either attending or producing events.

After more manoeuvring than a telehandler placing toilets (see our previous blog posts) 4G services will finally begin deploying in the UK. The first to market will be Everything Everywhere (a combination of the Orange and T-Mobile networks) which announced on Tuesday networks firing up in London, Birmingham, Cardiff and Bristol within weeks with more cities expected to follow before Christmas. Long Term Evolution (or LTE) brings a number of significant improvements over current 3G networks including download speeds of up to 20Mbps, improved algorithms for handoff between mobile cells (which should mean less dropped calls) and in some cases larger cell sizes meaning better coverage.

It all sounds great, however, there should always be a note of caution when dealing with cellular services which is probably best expressed by matching todays “3G” experience with what happens in the real world. Do you live in a world where your handset always has 3G signal, you haven’t dropped a call in months, data use is reliable, network masts never fail and when you are trying to text or call the box office during a live event with 20,000 other people on site it works first time? – The answer is carriers always sell the dream of the next generation; 4G is exactly the same. In reality what you should expect to start with is what was promised for 3G, meaning OK to good data speeds in cities and calls which rarely drop. Also lest we forget 4G, like 3G before it, is a consumer focussed technology offering which means very little in the way of speed guarantees or service up time. 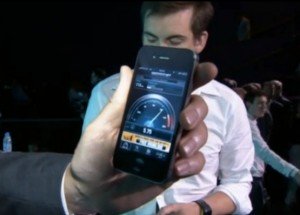 You can’t have missed the press, Apple’s latest iPhone 5 was announced last night. Those in the know will point out that even with this latest incarnation Apples crown has slipped slightly with handsets from Samsung and Blackberry winning in the specification war but that’s missing two crucial factors which need to be considered when dealing with anything from Cupertino. The first is the tidal surge of press and activity that follows anything iNew generating floods of new apps and ways to use the device, many of which rely on the iPhones killer selling point; the lack of learning curve. The second is the new technology which is bound up in this latest generation which includes the ability to operate with the new 4G networks, a new screen to show that high definition content even clearer (which means larger network downloads and faster streams required) and an all new software pack which further integrates social networking and always on connectivity. In addition Apple has given the iPhone one of the best features of the iPad which is its ability to work on both 2.4Ghz networks and 5Ghz which makes getting a good Wi-Fi signal, and keeping it, even easier.

That reliance on faster and always on connectivity will continue to keep demand growing for events who can deliver apps which enjoy video and interactive content at events.

Where Apple has missed a trick perhaps is the lack of contactless payment function others (such as Samsung and Blackberry) have started to deploy this latest technology which will put pressure on retailers of all sorts to start supporting the quick payment method. Apple is probably waiting for the market to settle before setting out it’s stall (and – knowing Apple – where it’s revenue stream is going to come from) but those early adopters will expect to be using their contactless payment methods this summer – we have another blog in a few weeks on this and our activity over the summer.

Mobile Apps at Events – Learning from the Past

It’s almost expected now that along with an event comes a mobile app for the iPhone, Android or other platform. At most events, certainly the larger ones and those outdoors in temporary locations, the enthusiasm for a mobile app soon wanes when the user finds that all they get is out of date information or error messages saying ‘no connection is available’. The simple fact is that the mobile networks cannot deal with data traffic effectively at event sites and this more than anything else leads to poor reviews in the app stores.

The two obvious approaches to fixing this problem are to either improve connectivity or make the app stand-alone so that it doesn’t need connectivity once it is installed on the phone. Improving connectivity via the mobile networks is not really an option, as even with temporary mobile towers the capacity and connectivity available is not good enough to deal with the sort of high density found at event sites and the cost becomes very prohibitive. A correctly designed Wi-Fi network can deal with the capacity and provide a much better user experience but this option may not always be possible in terms of budget.

I have seen more recently a trend to make event apps stand alone, driven most likely because of the connectivity issue, but there are two major flaws in this approach. Firstly the whole point of a mobile app is to offer something different, unique, current and interactive. If you take away the connectivity then you are left without most of those features and risk an app that is stale which, after an initial browse, is closed and forgotten about. The social media generation live in a connected world with a thirst for live information and that feature is what can make an app much more than an electronic programme guide. The second issue with a stand-alone app is that it doesn’t address the problem of downloading the app itself. Although you can try and persuade people to download the app before the event the fact is many will want to do it at then event itself and with a stand-alone app it is often the case that the install is even larger than a connected app as everything needs to be in the app download meaning the download is more likely to fail (and if too large is not allowed to be downloaded) over a mobile network.

There is a middle ground in all of this and it takes a leaf out of ‘mobile development’ from the 1990s when mobility was a laptop (more akin to a briefcase) and a 28k dial-up modem, it seems a lifetime ago now but it did teach developers an approach which is still very valid today. The approach is not earth shattering but it is too often forgotten by many of today’s applications, simply put it just means never assuming the network is available! More specifically it means factoring in the following design aspects:

Effective implementation of the approaches above will provide a much better user experience as the app operates when the network fails but the user still gets updates when they move into an area with connectivity, with the updates trickling in quietly in the background. There are some very good examples of mobile apps available but far too many still fall over or perform badly when network connectivity is poor and that’s just unacceptable for an event app.

We are now in the final stages of planning for the Showman’s Show 2010 and looking forward with meeting new and existing customers around the marquees and stands. This year our indoor stand (in the warm, number 68 ) is right on the main row whilst our outdoor stand (171) is at the end of avenue G. Whatever the weather it would be great to see you there.

If you haven’t had the chance to make your way over to the Newbury show ground before, The Showman’s Show is the trade show of choice for the events industry. An eclectic mix of everything from portable toilets, stages, marquees, lighting companies and of course event technology suppliers (us!) 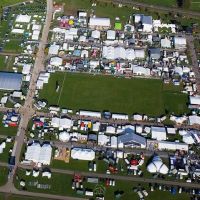 A little taster of some of the things we will be exhibiting:

Reliable Connectivity – We’ll continue to talk about our passion delivering temporary connectivity – wired and wireless for any size and shape of event, from media centres to entire festivals.

An Overview of Connectivity Options – From a phone line and broadband to high capacity fixed line and satellite services. We have a range of options to meet all needs.

Mobile Phone Data Offload – Fed up with smartphone apps not working at events? Find out what we have been doing to resolve this problem.

RFID Solutions – After successful trials in 2010 we will be demonstrating our Smartcard system for crew catering (no more paper vouchers!) and other authorisation aspects.

That’s just a few of the things we will be talking about, along with some old favourites like the Communications Tower Light, CCTV, VoIP, network management & monitoring, flight-case based network hubs and more. Drop in for a chat, a coffee or a bottle of the finest Etherlive water.

Good Wi-Fi delivery can be critical

At the recent launch of the iPhone 4 Steve Jobs, Chairman and CEO of Apple, was forced to ask the audience containing the world’s tech press, to turn off their Wi-Fi devices because the demonstration he was giving on stage kept failing. Later it was suggested after having a peek and visit GetFeatured website, that some 500 Wi-Fi networks were operating in the room, overloading the network.

Tom McInerney, from event technology company Etherlive, gives some tips on how to stop this happening at your next big event to make the network meets attendee requirements.