Highlights from The Gathering

For some time we have been really keen to get together a group of thought leaders from the events industry to discuss a range of technology related topics. With a fantastic team effort this event, which we called ‘The Gathering’, was held on the 30th of March at Lords futuristic media centre. Each of the four panels was focused on a specific area of technology with industry experts giving practical guidance, their opinion and answering questions from the audience. The notes below highlight some of the points raised but a lot was covered in the five hours so they are just a very small window on the discussions . To keep the discussion about technology in events going we aim to keep the twitter hashtag #eventtech for questions and comments.

Social Media – Chaired by Ian Irving the panel included Andrew Cock-Starkey from Lords and Jonathan Emmins from Amplify discussing how events can use social media before, during and after an event. 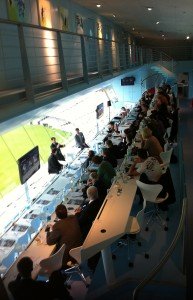 Event Vision – Tom McInerney chaired a discussion between Dan Craig, Loudsounds and Dale Barnes from Virgin Media focused on the key technology elements events will be focused on in the future.

Applications – Joanna Wales from Ascot Racecourse, Adrian Strahan and Chris Green discussed the key elements to a successful application and the challenges which still surround creating an app which gains traction within what is becoming an increasingly crowded market.

Real World Experience – Chris Green, Mike Lang and Tom McInerney fielded questions from the audience and discussed how some of the customers they partner with had developed an on-going technology strategy encompassing many of the topics that had come up during the day.

In summary a fantastic day to network, meet new contacts and learn. We hope to run The Gathering again and are really excited about developing the forum and taking on the feedback from the attendees.