The Perils of ADSL (Part 1)

ADSL. Never before has one technology been responsible for liberating thousands and frustrating just as many at the same time. Some may think I’m overplaying its importance but this one implementation of technology has made huge changes to our lives. I’m not suggesting it’s the light bulb or the printing press but as we install temporary connectivity services for our event customers around the UK it astounds me how high expectations are with regards to connectivity. Even better (or worse – depending how you see the world) is how quickly everyone has forgotten the pain of the dial-up modem which, until a few years ago, was our only way onto the Internet! 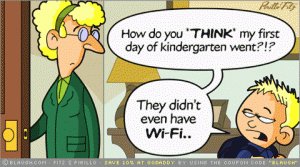 Everyone wants Wi-Fi (from compguy.co.za)

Broadband take-up in the UK currently stands at 73%, having more than doubled since 2005 when Facebook.com had only just been bought by Zuckerberg and friends for a mere £200,000. Fast broadband was something most people just didn’t have. I don’t mean people out in far flung corners of the country (that’s a generalisation I know…I’ll get to it shortly) but I mean people in towns and large villages where you were still stuck paying by the second for modems to squawk and shriek their way through six or seven emails at a time.

Now we expect, nay demand, always on fast Internet. Fast enough we don’t have to wait for the download to finish or the web page to render. Even in my short time on the planet I struggle to think how I ever survived on a 33k dial up modem (yes I had one). I remember the first time I used my newly purchased snap on modem module for my Palm Pro PDA at other people’s houses. I literally got rounds of applause for checking the weather using my Freeserve account through an 0845 telephone number. Nowadays if someone hasn’t got “20 Mbit/s” (megabits per second) broadband with Wi-Fi connectivity prevalent within the house I don’t stop for coffee, let alone dinner.

My point, I guess, is that broadband (now synonymously coupled with Wi-Fi) has become as ‘expected’ as the TV or the complimentary coffee. Not only does it mean companies like Etherlive exist to meet that expectation but, with or without technical partners like us on board, it’s expected to be provided and work, 100% of the time.

So in this, the first of two articles, we go back to the basics a little – what is ADSL? What are its limitations?

That’s part one of our review. Even with other options (explored in the next part) ADSL is sometimes the only option. In the next article we’ll also look at some of the more technical aspects associated with ADSL and what you can do about squeezing every little bit of speed from your connection.