October 18th-19th 2017 sees Etherlive exhibiting at the Showman’s Show for our 10th consecutive year, the only show we have exhibited at every year since our formation. Its’ been a journey so we thought we would take a look back through our archives. 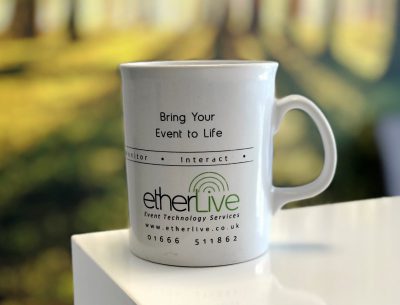 We still have some of the 2008 mugs we had made as a giveaway in daily use at the office! 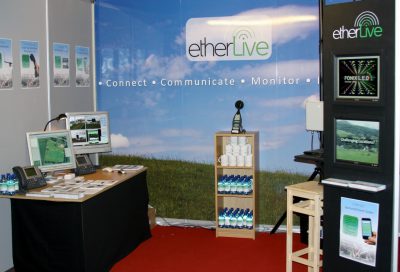 Amazing what you can squeeze onto a 3m x 2m stand

Less than a year after forming Etherlive we exhibited at the Showman’s Show for the first time in October 2008. We focused on a message of enabling events with good connectivity, reliable Wi-Fi, VoIP & CCTV.

Much has changed over the last ten years but that message is still just as important today, if not more so. We believed demand was going to grow hugely but I don’t think even we expected to move from the norm of a few ADSL lines to multi-gigabit fibre so rapidly on event sites. 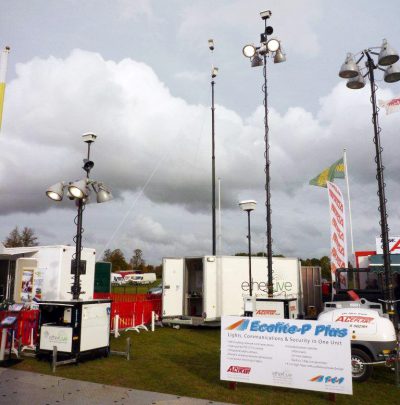 In conjunction with Ace Plant & TCP we launched the Ecolite P+ at Showman’s 2009. The Ecolite P+ was a more eco-friendly tower light using metal halide discharge lamps coupled with CCTV, Wi-Fi and a PA system. The light was palletised so that more units could be transported on a trailer and had a generator which could run for several days on its internal fuel tank.

The fleet of Ecolites remained operational until 2017 when they were retired, replaced by newer units in which the technology has evolved requiring less customisation. Tower lights with CCTV and Wi-Fi remain a popular option for certain locations on event sites and construction sites. 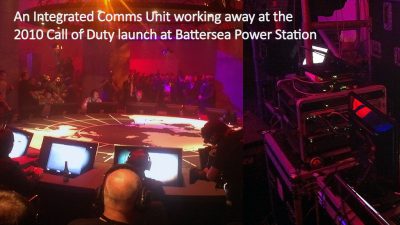 Back in 2010 access to high capacity services was still relatively limited so often multiple services needed to be aggregated, such as ADSL, satellite and 3G. Intelligent routing, balancing and bonding across these services became a key factor.Today everyone has at least a backup 4G unit and balanced or bonded 4G is commonplace for smaller pop-up style events. It is not the solution for critical services but it has its place and it won’t be long before we are demonstrating 5G solutions.

Today everyone has at least a backup 4G unit and balanced or bonded 4G is commonplace for smaller pop-up style events. It is not the solution for critical services but it has its place and it won’t be long before we are demonstrating 5G solutions. 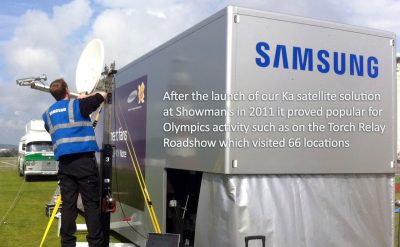 The launch of Ka band satellite internet access in 2011 radically changed the use of satellite at events. Previously satellite internet was a relatively costly and difficult proposition which didn’t give a good user experience. The Ka band internet service was designed for broadband services, rather than broadcasters, using smaller dishes and allowing multiple users to share bandwidth to keep costs down. It has proved hugely popular and is now a common sight at events. It still suffers the important limitation of all satellite services – high latency – so can only be used for certain services and is a very different user experience to other types of connectivity.

2011 also saw us demonstrate a beta version of an outdoor femtocell which provided mobile coverage from an internet connection, sadly the units where never brought the unit to production. A high-end DECT based phone system was also on display offering wireless roaming across an event site. This was used heavily in our deployment for the London Media Centre in 2012 and is still in use at events today. 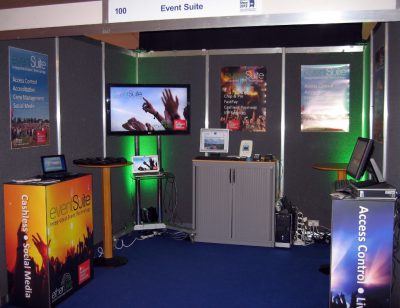 Since 2010 we had been working on RFID solutions with a crew catering system and later an accreditation/management system. In 2012 we worked with Intelligent Venue Solutions to bring a number of RFID related activities under one umbrella at a spin-out stand at Showmans.

Cost remained a barrier to wide-scale adoption and with the rapid rise of open-loop contact-less payments, over time we have moved into an enabling function for other providers. Today, for example, we deploy thousands of contact-less payment terminals and support ticket/wristband scanning for all the main providers. 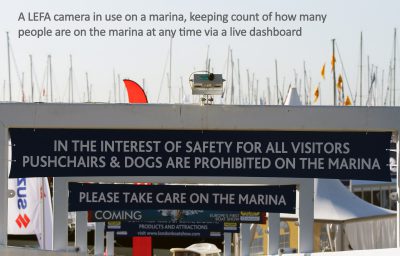 In 2012 we introduced a people counting solution which we refined and extended into Live Event Footfall Analytics (LEFA) for Showman’s 2013. Structured counting, for example in well-contained routes such as exhibitions, is now well established, whereas unstructured crowd density analysis is still an evolving area but shows great potential longer term for helping manage crowd flows and density.

2013 also saw us demonstrate 4G solutions and a Teenage Registration system designed for WOMAD to assist with the identification of under-18s and their associated responsible adults. Our first use of HD-CCTV cameras was also during 2013 with demonstrations at Showmans. We are now moving some cameras to QHD and testing 360 degree cameras. 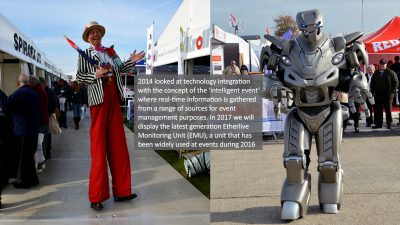 With more and more technology being deployed at events the next logical step is the integration of technology and communication between all aspects providing a rich level of event intelligence. From HD-CCTV, ticket scanning information and device location information, through to geo-tagged social media posts, a picture can be built up of what is happening on site and fed live into event control. 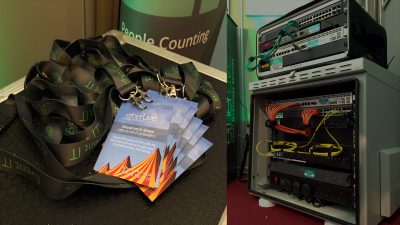 Ever increasing requirements, demand for higher speeds and more capacity had driven a rise in the amount of fibre deployed around sites. Bigger sites were typically run with a fully routed design providing improved redundancy, increased speeds and better isolation between areas. This was often coupled with multiple gigabit internet connections which were diversely routed for redundancy.

Extending on from the Intelligent Event additional components were demonstrated including Automated Number Plate Recognition (ANPR) and the Etherlive Monitoring Unit (EMU). The EMU is a type of IoT (Internet of Things) device which can be used to monitor a variety of things. It is particularly useful for monitoring power giving us early warning of power issues across a large event site.

In partnership with AirBox Systems, we demonstrated an incident management system, developed initially for the emergency services but just as applicable to event sites. 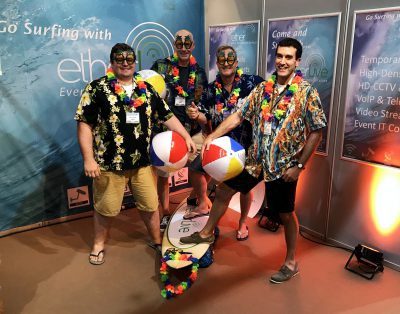 A light-hearted surfing theme for 2017

In a way it is ‘more of all of the above’, demand and complexity continues to increase, more and more devices are becoming network enabled and the broader event eco-system drives new requirements. The importance of reliable networking, Wi-Fi, CCTV, VoIP, ticket scanning and payment systems is now recognised as one of the keys to event success.