As the events industry continues to compete in challenging economic conditions, our session on leveraging technology to create new revenue opportunities created a lot of interest during Confex last month. Over 50 people attended, hoping to understand how they can maximise the use of what, in most cases, they already have.

We started the session discussing the event ‘Jenga’ tower – this simple approach helps organisers understand the importance of the foundation and building blocks before adding revenue related solutions. Without the stable foundation blocks of connectivity and networking in place – just like Jenga – the tower is likely to fall when you add more weight (or in this case products) to the top.

We presented that the best ways to get a stable foundation include asking the right questions of a venue (see our 10 critical questions here), talking with experts on the actual requirements and placing orders early (often saving money).

With a solid foundation in place the opportunities then breakdown into several key areas:

Maximising content – If your event involves presentations or discussions, stream the content for free over services such as ustream or for internal events check if the organisation has a method to allow sharing of video. Publishing the content for free can be done with advertising subsidy but if you want to charge that’s also possible. Either method will allow those who can’t travel to join in.

Increasing exposure for sponsors – In addition to the normal sponsor opportunities technology can add more exposure and record those who use it. For example offering a free Wi-Fi hotspot to attendees for their email and a few other key bits of information (like post code) allows the collection of data for providing a service. A hotspot in one specific area will limit the investment needed. 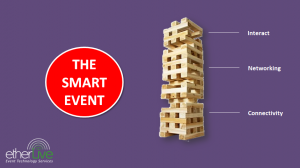 Cashless/Contactless technology – Contactless systems allows payments to be processed quicker. This could be a ‘closed loop’ system like a token or loyalty system which enables the event to offer reduced rates and therefore collect data on what’s being consumed. ‘Open loop’ systems such as those with Visa or MasterCard enable reduced transaction times and drive up spend.

Exposure to social media systems – Allow attendees to check in to locations or use QR codes to download content immediately. Linking with social systems enables free exposure to the attendee’s networks such as Facebook, Twitter or LinkedIn enabling your event to be exposed to people who may work in similar industries or have similar interests.

Smart applications – Apps continue to be expected for many events, allowing access to speaker’s biographies, voting functions, live Q&A and pretty much anything that can be imagined.

The audience at Confex asked good questions, for example; how much are things like splash pages worth to sponsors? Which of course depends on the exposure and type of audience. There was also interest in what information is available to help with new technology topics. A great resource is the ESSA technical guide available to all members.

Few things in life are as cut and dry as Sinatra vs Gaga or Apple vs Microsoft. The recent industry activity campaigning for free Wi-Fi at venues is a good example of something which should be straight forward, but is in fact a little more complicated.

The ABPCO (Association of British Professional Conference Organisers) recently announced securing more than 100 signatures for its campaign to bring free Wi-Fi to major event venues across the UK. This is a great campaign and should help focus the minds of venues who overcharge for basic access to the internet. Whilst I support the movement I find myself sympathetic to the venues who now find themselves between a rock and a hard place.

The hard place is the overwhelming demand for internet (of any type!). It’s exploding and will continue to do so; from smartphones, tablets and good old laptops, people need to be connected. What are they doing? Quickly replying to that email to keep momentum up in a project, sending photos and video to the office for those that can’t attend the event, using QR codes to look up data on stands, checking their mapping application to plan around the traffic…the list goes on and on and on.

I was enjoying meeting customers at Square Meal just the other week and found myself sitting on the benches outside clearing email, eating a baguette chatting with several others doing the same thing. We were hanging onto a weak 3G signal (hence sitting outside!) instead of paying for access inside. If you needed another data point, apart from thinking how many times today you probably already used the smartphone in your pocket, a few months ago we provided a 300 acre Wi-Fi hotspot over the WOMAD festival and this year internet usage by attendees increased in excess of 250%. 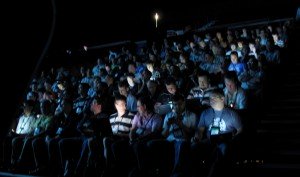 The glow of internet demand, image courtesy of Google

The rock is the cost. Of course nothing is free and installing hundreds of access points across a large venue isn’t cheap, let alone the cost of having significant internet access behind the scenes. If you try to do it on the cheap it will only come back to bite you.

I can see both arguments. Why give something away for free when people will pay for it? Especially when installing a quality venue wide Wi-Fi solution isn’t cheap. Infrastructure requires proper management, not to mention the cost of providing considerable internet backhaul.

Unfortunately venues have few people to blame. Like several other industries they fail to realise new revenue opportunities from their infrastructure, instead opting to continue the ‘pay by hour, day or week’ just as they have done for many years. Customer understanding is also an issue – why at home is their broadband £12 per month and in a venue £10 per day? Whilst some of this is opportunistic pricing by the venue, there are real differences in infrastructure and cost to deliver a quality solution to a venue that works for all users. However this is probably the core of the issue – consistency. Sometimes you get good free Wi-Fi, sometimes you pay £10 and get poor Wi-Fi. This inconsistency leads to frustration, a lack of confidence and drives a feeling as to why anyone needs to pay for it at all.

To me the answer is likely to be a middle ground. Firstly conferences and venues should be investing in greater levels of visibility to what people are doing with their network – for example why can’t the customers be metered against a range of price plans? Risky for the event if it’s simple pay as you go as this could rack up extensive charges, but price points could be negotiated. Secondly it’s setting the right expectations for the network that is in place. By all means offer a free network which is limited to X speed for X time with advertising and then, if you want, pay for more significant access.

The second aspect is that we need to get to a point where venue Wi-Fi is certified or approved in some way so that potential users and organisers have some confidence and guarantee that they will get the service promised.

The final point I would make is that venues should take a leaf from Facebook’s business model (or Google’s). We use their services every day – but have you ever paid for it? Of course they advertise abundantly but actually the most valuable element for them is your data – this could very simply be collected at venues and sold back to the event or other parties. It’s a contentious area but it is happening just about everywhere else.

The discussion will continue for some time no doubt and it will be interesting to see how things develop over the next six months as venues compete to deliver additional services and as customers closely manage their budgets.

Steve Birnage and I were fortunate enough to talk at the HBAA (The Hotel Booking Agents Association) 13th Annual Forum this week on their theme of Future Vision. We based our workshop on the concept of a ‘technology venue’ using each of the various ‘floors’ to represent a technology and how, for example, any service offering (near the top of the building) needs a good foundation at the bottom.

We went on to discuss the many other floors which are all critical for eventually delivering a great customer experience. Attendees where really keen to engage and we got some great questions especially as many are focused on winning business for the 2012 Olympics, opportunities which will have high expectations for connectivity on site. A quick summary of the main points below;

The foundation – High speed, dedicated uncontended internet access is a must. Many venues still attempt to share one connection between rooms, bars and conferencing facilities but this won’t meet many conference organiser requirements these days. We have recently upgraded a London customer with significant bandwidth for their conferencing facilities entirely separate from them having great connectivity for their bedrooms.

Ground floor – A good, reliable wired network which is managed by a third party or venue with appropriate support can make deploying services and performing upgrades later on quite straightforward. Here we were using examples about running fibre between key points in the building (either at design or re-fit) to ensure high speed services can be delivered without causing massive headaches. We used the term ‘managed’ a lot within this section but really the key is to ensure services can be changed quickly remotely. 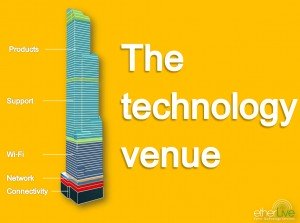 First floor – Reliable Wi-Fi networking. Separate to the internet or network on site it is critical to ensure a wireless network is deployed to deal with the appropriate requirements in mind. For example a conference room which seats 500 needs to have the wireless infrastructure to handle that. New technologies can really help here – like 802.11n mesh wireless networks which can be extended by just plugging in access points which automatically extend coverage however this is dangerous to do unless your environment will automatically minimise interference or you have an appreciation of what channels other access points are using.

Second floor – Make sure you have the support lined up since there is nothing worse than investing and not realising value. Not only should venues have technical support, be it in house or outsourced but also staff should be familiar with the functions and features so they can represent it to customers and prospects who may ask.

Third floor – The critical revenue generation floor – here venues should be thinking past charging for the internet access and looking at sponsored hijack pages, content driven micro sites, support for live streaming and perhaps a strategy about how to re-use customer content in terms of video (perhaps for those who could not attend).

Those key areas got some great interaction from the audience. Many of whom have made significant investment in technology but continue to look for opportunities to maximise return. It was also great to have discussions with several of the larger hotel brands who are committed to contracts and are keen to ensure contracts continue to keep a focus on innovation.