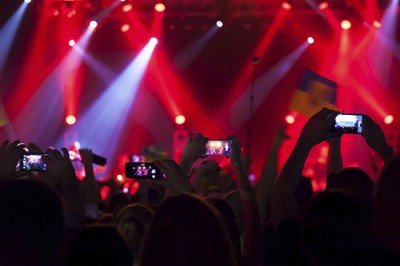 Only a few years ago communication from attendees at an event consisted of the occasional phone call (if you could make one) and maybe a text or two. The phenomenal success of smart phones and social media has changed all that at a pace no one was expecting.

We raced through textual commentary and onto photo commentary within a couple of years, a development which saw a huge shift in network demand on event sites, the few bytes of a text message replaced by megabytes of high resolution photos.

Now we are seeing the next shift into video, initially starting as a ‘record and upload’ approach but rapidly shifting to live video streaming with some current generation smartphones capable of 4K ultra HD video at more than 50Mbps! Last week Facebook announced Live Video, their offering in the live video streaming arena to compete with Periscope and Meerkat, a reflection on how fast the area of personal video streaming is moving. The key point is that Facebook Live Video is integrated into their main application removing a barrier to usage and fuelling more rapid adoption across its massive existing user base.

The data demands of such use are vast, especially in a high density environment such as an event and therefore, for the moment, this is likely to restrict the growth to some degree, however, it is happening and with it comes a significant shift in thinking about how content from live events is managed.

Putting aside the technical pressures on event networks in terms of capacity the real question is about the content. We have seen the shift from ‘no cameras’ to a reluctant acceptance that the control of photos from event sites is pretty much impossible, even though many artists do not like the sea of people watching events through their phones. Increasingly there is some acceptance of a time shifted amateur video appearing on YouTube but the idea of real-time video streaming takes the subject of content management to a new level.

For organisers, promoters and artists the question is do you try and stop it from occurring using either technical or physical approaches, or accept it and turn it to an advantage. Technically restricting video streaming on an event managed and controlled Wi-Fi network is perfectly feasible but on the 3G/4G mobile network services it would come down to discussions with those operators as to whether they would be prepared to block streaming from specific cell towers during an event which is unlikely, although in reality at present it is unlikely these networks would be reliable enough to support a video stream.

Alternatively, rather than trying to block at source, a continuous scan of live streaming services to identify and remove streams could be employed but the effort required to do this would be huge and would not be successful without the support of the service providers such as Facebook & Periscope.

Physically trying to control it becomes a question as to how strong do you get with identifying and removing abusers, an approach which can cause tension between fans and artists, would require additional resource to police and would never be entirely successful.

Is the answer then to accept and adopt, finding ways to benefit from this new communications channel? Does it really harm the event or the artists to have boundless unmanaged content strewn across the internet? On the other hand, do you want someone wandering around backstage streaming everything? Or someone in the front row streaming what could be a surprisingly high quality and atmospheric video? It’s a copyright nightmare but potentially provides massive exposure.

Technology is not only at the source of this issue it is also likely to be part of the solution too but not before event organisers decide on approach. One thing we do know from technology over the last twenty years is that it cannot be ignored, it is the ultimate disruptor and will always find a way of winning through.