Etherlive Performs at the Showman’s Show

A number of the Etherlive team enjoyed another great year exhibiting at the Showman’s Show. The weather was bright and sunny but cold, no pouring rain at the end like last year! The Show was relatively busy throughout but did die off very quickly on Thursday afternoon. We demonstrated some of the new innovations we will be bringing to the market including a crew accreditation system, to which customer response has been fantastic. A number of further enhancements are in the pipeline based on feedback from this year’s pilots. 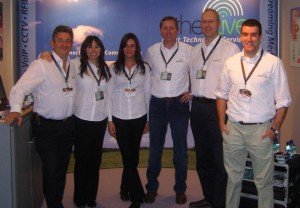 Also on display at the indoor stand were our flight case communication systems, designed to deploy a network quickly connecting to whatever Internet connectivity is needed (satellite, leased lines, ADSL. 3G). We also demonstrated our VoIP handsets and Wi-Fi PDQ machines which can be configured for any merchant. Outside at the chilly (but dry and sunny) end of Avenue G our Mobile Command Centre (MCC) acted as the centre for the outdoor stand, complete with 17m pneumatic mast and flag. The MCC is used for large events, providing connectivity, hosting, network management and a support base for several engineers. The MCC is often coupled with our communications tower light which is specially designed to support Wi-Fi, wired network access, CCTV and public address along with being a much more environmentally friendly tower light. The outdoor stand was shared with one of partners, Aceplant, who were demonstrating their range of plant equipment for use at events.

Our ‘Venue IT powered by Etherlive’ brand was also on display at the show. The Venue IT brand will be increasingly used for permanent installation such as Showgrounds and for customers looking for a partner with which to discuss straightforward event communications.

If you didn’t get a chance to see us at Showman’s then we will be at the Event Production Show on 2nd and 3rd February 2011 at Olympia, London or you can get in contact to setup a visit any time.

02 February 2010 – Festival directors will be able to reduce the hassle and cost associated with on-site communications, following the launch of the Ecolite-P Plus; a mobile communications tower which combines lighting, connectivity, surveillance, and PA services.

Traditionally, event organisers have hired in these services as separate units, a time intensive and costly exercise.

Tom McInerney, Sales Director with Etherlive, the company bringing Ecolite to the events market, explains, “The Ecolite concept comes from the construction industry – taking temporary light, sound and communications onto exposed and sometimes remote sites. Working with ACE Plant, we’ve adapted the tower to suit the needs of festival communications; combining services that would otherwise have been hired as separate pieces of kit – each needing its own power supply and stand.”

The Ecolite-P Plus, developed by Etherlive in partnership with Ace Plant, also includes many features which will help site managers reduce their environmental footprint, alongside advanced CCTV capabilities such as auto number plate recognition.

The Ecolite unit packs away into a single pallet size, which makes it convenient to transport.  Once in situ, the Ecolite tower can only be moved by a fork-lift truck, which helps to minimise the risk of theft.

Alan White, Managing Director at Ace Plant adds, “The beauty of the Ecolite-P Plus is that, once deployed, it can be left to run on-site for up to seven days with its own power generator. This gives festival organisers one less thing to worry about”

Visitors attending the Event Production Show will be able to take a look at the Ecolite-P Plus by visiting Etherlive on stand 614.

About Etherlive
A successful event depends on great performances. From WOMAD and The Green Man Festival to Southampton Boat Show and Three Counties Show, we are the ones that make IT work. Etherlive sits behind the scenes delivering reliable WiFi, the internet, telephony, laptops, cash machines and interactive messaging. Whether in a field or a hanger, we make connectivity simple.

The company was formed in 1973 by David Adams and Frank Cundell. Initially the company was based at Firs Farm, Old Stratford and in 1974 Ace Plant purchased its first tractor, a 1968 Ford 4000. This original tractor is still owned by us and was recently been restored for display at our 25th anniversary party.

Since those early days we have expanded our range of services considerably and this policy of continued improvement and expansion necessitated a move in 1981 to new purpose built premises in Cosgrove Road, Old Stratford.