A well connected media centre goes a long way to keeping journalists happy at events, but all too often I see comments in blogs and on twitter about poor Wi-Fi, slow connections and network meltdown. We operate and support connectivity for many media centres during the year ranging from small rooms with only a few users to large centres catering for hundreds of simultaneous users, so I thought I would share our approach to delivering an excellent experience. 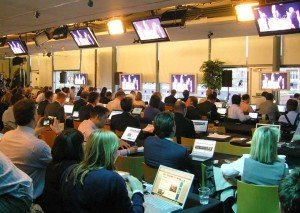 One example I will drawn on is the media centre we operated for Sky News for the Election Debate Broadcast earlier this year which had some interesting requirements. It was an unusual event in that the centre was only to operate for about eight hours in total but during the peak hours around the debate it was expected that the room would be used by over 400 journalists, politicians, television and radio crews simultaneously. The brief also required that all access was to be wireless and that various ‘network throttles’ had to be used to block certain types of transfers and maintain fair usage across all users. Although this event was larger than the average media centre the same principles apply whatever the size, the main aspects of which are as follows:

This may sound obvious but the wrong connectivity lets down a significant number of media centres, you may have the best wireless on the planet but if the internet connectivity is not good enough the users will be frustrated. The most common problem is using a broadband/ADSL line for connectivity which for all but the smallest of centres is likely to be totally unsuitable. The usage in a media centre is different from typical internet usage in that uploading of data is more important than downloading data. Broadband/ADSL lines are designed primarily for downloading and have a very low upload speed, typically only about 400kbps. The second issue with broadband lines is that the vast majority of providers use a high contention ratio on their service, this means that even if the connection says it’s 8Mbps, at the exchange the connection typically is then shared with up to 50 other users. The busier the exchange the worse the experience becomes.

So what options are available instead? There is no straight forward answer to that as it depends on location, requirements and budget but the key thing is there are different options and with some up front planning the right solution can be put in place which can make a huge difference to the users experience. For the Sky Election Debate we had a 1Gbps fibre link with a second diverse routed failover link providing a typical wireless upload experience of 20Mbps per user (this varied based on the client device, an 802.11n client typically had 80Mbps). I’m not suggesting that all media centres need to offer that sort of speed but it shows it can be done.

Connect up a wireless access point, put it in the corner and off we go…which leads to a favourite Dilbert cartoon of mine.

Delivering a good wireless experience is not ‘plug and play’, but it is a lot less painful if the right approach is used. Firstly never use consumer or low-end business wireless products, they will not deal with the simultaneous usage and throughput required, it needs high-end business wireless products to deliver a good service and even then capacity planning is critical. Wi-Fi is a shared medium meaning that if your client is connected at 54Mbps (and unfortunately although 802.11a/b/g Wi-Fi is promoted as having a speed of 54Mbps in reality this is closer to 20Mbps), that is a best case assuming no one else is using the network at the same time.  As soon as another user connects the available bandwidth is shared between them. Put 25 users onto one wireless access point and each user may only see 800kbps!

Providing good bandwidth to lots of users therefore requires multiple wireless access points, which can be achieved in several ways, but it requires careful planning otherwise choas results with all of the wireless access points interfering with each other. This area is complex and will make this blog way too long but a truly managed environment is the only way to deliver this successfully and that requires:

The wireless portion then needs to be backed up by good switching and routing, typically all running at gigabit speeds. For critical media centres redundancy in terms of network design and power backup also come into play. Other factors include authentication (username and password, shared key, etc) and breaking the network into mutliple ‘virtual networks’ so that different services can be offered to different user groups.

Once the network is designed and implemented it would be nice if it looked after itself but in a busy media centre there are still more challenges. The most common issue is interference, particularly in the 2.4GHz frequency range (which is the most common one for wireless clients) as many other items use the Wi-Fi frequencies too – bluetooth, DECT phones, ad-hoc wireless networks, RADAR, microwave ovens (yes I’m serious, particularly industrial ones) and various pieces of broadcast equipment such as video senders. These sources of interference can wreak havoc on Wi-Fi networks. A managed Wi-Fi network can automatically deal with some interference by switching channels and power output but in a busy media centre there is often no option but to use a spectrum analyser to constantly scan and identify interference sources so that they can either be eliminated or avoided. During the Sky Election Debate 113 sources of interference were identified and dealt with!

Spot the wireless cameras - always a concern for Wi-Fi

Active monitoring of the network is also important, this gives real-time information on the status of all the devices such as the wireless access points, the data passing through the network and how much capacity is being used. This facilitates making tweaks to the network before problems occur. It also has the benefit of providing a post event report with lots of data on usage.

Having people to provide good technical support to users in the media centre is one of the best ways of keeping  journalists happy. For example the Sky Election Debate happened not long after the launch of the Apple iPad in the US so a number of people had imported them from the US and hadn’t got to grips with them yet, the support staff not only helped them connect to the network but also gave some basic usage assistance. That level of support is highly appreciated and tends to lead to favourable comments in the articles they write.

Delivering a good experience in a media centre is not without its challenges but those challenges can be overcome by using the right tools for the job, good planning and a technical team that know that they are doing. At the end of an event when journalists come over to specifically say “it was the best wireless experience I’ve ever had” then you know it was a job well done.