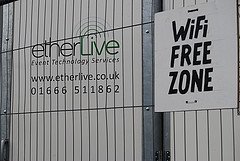 Another week, another big event, another twitter stream full of complaints about Wi-Fi. Rightly or wrongly Wi-Fi is touted above food, toilets, queuing, decoration and just about everything else as being critical to an event. It’s been the same for several years now with seemingly little progress, how can that be the case?

The first response is typically to blame the technology and there are certainly plenty of cases where poor designs and implementations are part of the problem. Building an effective, reliable and performing wired and wireless network is complex but not impossible. These days the main issues tend to lie elsewhere.

The first issue is cost. Delivering a true high capacity, high density network requires significant investment with a large chunk of the cost down to the internet bandwidth required. The price of low quality consumer bandwidth like ADSL and FTTC may be at an all time low but high capacity business quality fibre circuits are still very expensive, especially for short term use. The usage patterns of the attendees have also changed over the last few years with current demand as much about upload as download which, coupled with richer content, all continue to drive demand for more bandwidth.

You can provide the best Wi-Fi on the planet but if it isn’t backed up by the appropriate internet bandwidth then users will have a poor experience. There is no magic here, if you want 10,000 users to have a good experience you need multiple high capacity business grade links, yet most organisers see the cost of this bandwidth as top of the list for cutting, well above other items which ironically users complain far less about.

The second problem is particularly significant in the exhibition and conference areas – rogue Wi-Fi. The Achilles heal of Wi-Fi is its unlicensed nature, which on one hand has allowed Wi-Fi to become pervasive across the globe rapidly but on the other hand is slowly killing it. Wi-Fi currently operates at two relatively narrow frequency bands – 2.4GHz and 5GHz. These two bands are divided into a number of channels which are shared by all Wi-Fi (and some other) devices. The problem is there are not enough channels available, especially at 2.4GHz so in a high density environment managing the channels which are available is critical to success. That in itself is hard enough but now add in all the exhibitors who have brought in their own Wi-Fi access points, then all the Mi-Fi devices and to top it off all the Bluetooth noise (which also operates at 2.4GHz) and you end up with a large conference hall with thousands of devices all shouting at each other to the point no one can be heard because it is just a mass of interference.

The idea that all of these devices can share the wireless spectrum effectively is simply not true in a dense environment. To make matters worse it’s a vicious circle – the more often an attendee or exhibitor has a bad experience the more likely they are to bring their own device next time further adding to the problem. Even worse is that every new Mi-Fi device has a little more power and those with their own Wi-Fi think more power and more access points will make things better raising the interference and noise further.

Those who work in this area have known for some time that 2.4GHz as a client access frequency at an event was a lost cause and the only hope was to move people to 5GHz as laptops, tablets and smartphones increasingly supported it. The extra channel capacity at 5GHz, no Bluetooth interference and fewer 5GHz Mi-Fi devices made for ‘cleaner’ air, unfortunately that is rapidly changing and soon 5GHz will be as crowded as 2.4GHz.

There are only a couple of solutions to this problem, the first is long term and probably unlikely. Wi-Fi needs more spectrum and there are various discussions and proposals for increasing the spectrum available but it also needs to be managed – separating consumer type devices away from lightly licensed professional frequencies so that each has its own space. This will not happen quickly and would take many years to trickle down through devices but it could be the long term nirvana to truly offer a reliable Wi-Fi service.

The second solution is not really technical at all, it just requires event organisers to listen to and take seriously what event IT companies have been saying for years – the Wi-Fi spectrum at events must be managed. In the broadcast arena spectrum management has been taken seriously for years and it works very well. If we want event Wi-Fi to work then the same approach must be used. That means taking a hard line when an exhibitor wants to use their own device – it has to be pre-approved with specific parameters or rejected, and the agreement has to be enforced. No more rogue Wi-Fi it ruins experience for everyone.

This is easy to say, it requires trust that an official provider is going to deliver a good service and I appreciate it is hard to enforce requiring support from all levels but it can be done (we have examples) and the difference it makes is considerable and everyone gets a working service. It doesn’t fix everything but unless something is done across the industry to support this approach then paying money out for Wi-Fi is pointless and frustrates users more than if there was no Wi-Fi at all.