Conference Wi-Fi – Ignore at your Peril

‘Good news travels fast, bad news travels faster’ has never been a truer saying in the social world of retweets and ‘likes’. I wasn’t at Mobile World Congress this week but I did follow the stream of tweets originating from there. Amongst those tweets were comments about poor Wi-Fi coverage, I have no idea whether the Wi-Fi was poor or not but with a few negative comments bouncing around the ether it can quickly lead to the perception that another large conference has not taken it’s audiences desire to use mobile technology seriously – particularly damaging  when it’s a mobile technology conference!

The chances are it was a few people having localised problems with their devices but its another example of the damage that can be inflicted very quickly when attendees feel they are experiencing a poor service. Both Apple’s Steve Jobs and Microsoft’s Steve Ballmer have also experienced the pain of poor launch event Wi-Fi in the last year, with hundreds of press watching and commenting, and the result that the issues became a bigger headline than the product itself. So, what can you do to avoid the issues at your conference or launch? 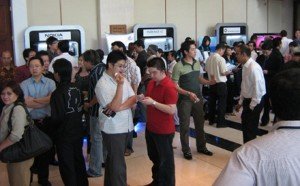 1) Know your audience – What type of press is attending? What’s the demographic of the audience? You might think only tech events need technical services but many launches these days need high quality internet, for example London’s Fashion week had a huge amount of live blogging along with video streaming, posting of images and tweeting. Understanding these aspects is the starting point for working out what level of service is required.

2) Be realistic about capacity – Poor Wi-Fi will frustrate people more than no Wi-Fi, and good Wi-Fi with no sensible internet capacity is just as bad. Mobile data demand is growing exponentially but far too often the capacity required is under called. Budgets may be a challenge but often the problem is exasperated with last minute bookings which have a higher cost. Internet bandwidth is not something that should be an afterthought, it should be up towards the top of the requirements.

3) Work with social media – Working on the assumption that people who are tweeting and blogging will look after themselves is missing the opportunity to engage with a huge audience. People will tweet regardless so it is critical to get involved  to address comments. For example if someone tweets the Wi-Fi is bad, wouldn’t it be great to send a support engineer over to check everything is OK with their system? They are then far more likely to post a positive comment.

4) Offer a variety of options – Although Wi-Fi is great there will always be someone who has a problem getting connected, having somewhere for people to go and plug a cable in as a fall back creates a great impression. Couple that with support staff who understand the common issues around firewalls, VPNs, connection agents and drivers and the press will feel they are being catered for.

5) Partner with the venue – Don’t just accept that the venue provided Wi-Fi will work for you and your customers’ requirements, in the vast majority of cases this is not the case. Check they have dealt with a similar scale of event, understand how they intend to support users, question their capacity. High capacity Wi-Fi is a very different game to a typical casual usage Wi-Fi installation and many common wireless products are just not up to the job.

It may be a cliche that we ‘live in a connected world’ but we do, which is both powerful and dangerous, and most importantly is something that cannot be ignored if you want to maximise good exposure.