Apple’s Latest Launch and What it means to Events

Announcements from Apple always have a certain sparkle; their PR is the slickest, their presentation is faultless (although in this case it showed even the best can have technology problems as the video stream faltered frequently) and, most importantly, they have a knack of defining a market.

Apple were not the first with a portable mp3 player, yet the others are long forgotten as the iPod defined the genre. Before the iPad was launched in 2010 many, many tablets had come and gone. Arguably technology had finally caught up and the introduction of the iPad has allowed a generation to enjoy lightweight computing without overheating laptops on laps, creaking screens and tapping keyboards.

The announcement today of the iPhone 6, the iPhone 6 plus and the Apple Watch are exciting in themselves. The phone models are the extension of the brand we all know well; though this time with an increase in screen size (4.7” and 5.5” respectively vs the typical iPhone 4”). The Apple Watch is an extension of the handset with a screen that allows access to apps, information, maps and much more.

However, there is one absolutely critical technology included in all three products which the market has demanded for some time; Near Field Communications (NFC). 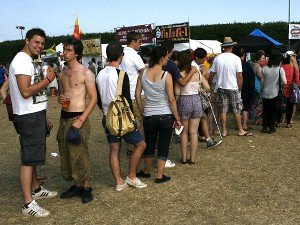 Can a push from Apple get cashless moving and vanish those queues?

The inclusion of NFC facilitates payment for goods directly from the device. A swipe of the phone, or now watch, against an NFC reader allows the transaction to complete. Again other manufacturers have offered this for some time, but it takes an influencer like Apple to really drive customer awareness.

One thing Apple are experts at is understanding that it takes more than just technology to go from niche interest to mainstream – it’s about the complete package. The iPod owes much of its success to iTunes which in turn was successful because Apple had lined up a huge catalogue from all the record labels.

In this case it’s not just about the inclusion of NFC, it’s as much about the launch of Apple Pay where they have already lined up Mastercard and Visa as launch partners in the US, along with retailers such as Subway and McDonalds. In a smart move Apple has also said that with Apple Pay they have no access or visibility to the transaction data, quelling fears over data protection which could have been a hindrance.

How powerful will it be to use something on your wrist to process payment? Very.

What does this mean for events? So far open-loop and closed-loop contact less payment systems at events have seen slow adoption, partly due to implementation cost and lack of agreed standards, and partly due to customer resistance due to privacy concerns.

Although it will still take time for suitable penetration of the new devices this long awaited inclusion will accelerate and change the landscape for mobile/contactless payment and associated services.

Those without a strategy for contactless payment systems need to start working out how best to take advantage of a system which allows immediate transactions without the need to top up cash (and then bank it the other side).

It also puts into doubt the longer term viability of proprietary closed loop systems as users are more likely to trust well known established names which have a broader acceptance.

For event organisers it also means more consideration for the ancillary services like charging and, of course, connectivity which all of this relies on.

Whatever happens, if anything was going to highlight NFC technology to the wider world (whether what they buy has an Apple logo on it or not) this is it.